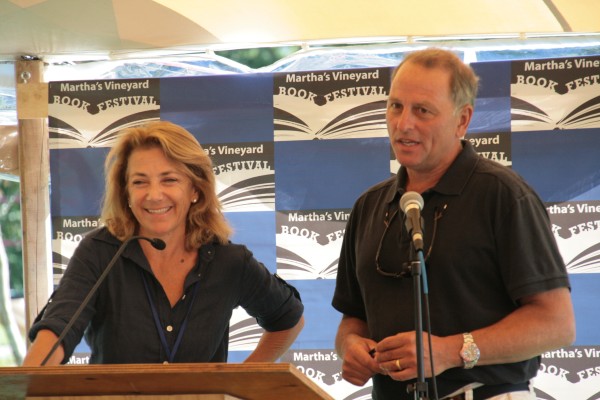 I admit I am a bit challenged when it comes to cooking, so the thought of cooking fish from Melinda Fager’s new cookbook, Living Off the Sea, put me in a mild frenzy. Then I stopped to actually read the cookbook, and I realized that it was written in a language that even I could understand. The ingredients and preparation work appeared simple. Melinda was very sweet and assured me that I wasn’t the only one with this fear. She suggested I try the pan seared bass recipe. I wasn’t as challenged as I assumed I would be and the preparation time was minimal, and it tasted delicious. I was so encouraged that I tried the same recipe with bluefish, and had the same satisfying results. Melinda normalized my worries. She explained, “I’ve learned a lot of people are afraid to cook fish, so I hope this book dispels some of that fear.”

Melinda has been married for 30 years to the highly regarded producer of 60 Minutes and Chairman of CBS, Jeff Fager. In this book, however, it is clear Jeff is all fisherman. The book reflects life on the island of Chappaquiddick and brings together family recipes, essays and her photographs. They have spent over 30 summers as a couple on this island, raising their three children, who are now adults. The children also contributed to the book. 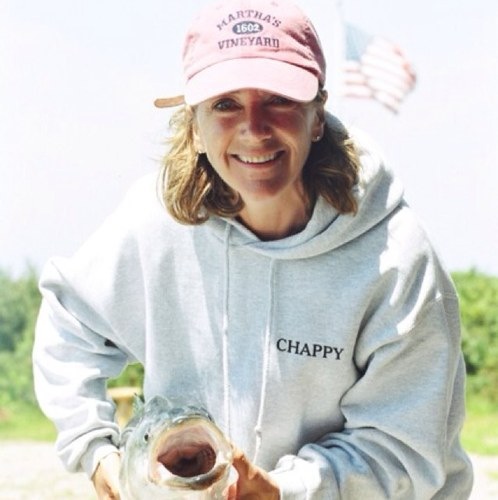 Aside from cooking, Melinda also loves being behind the camera lens and has taken photos for years. She explains her passion for this art grew while participating in Alison Shaw’s photography workshop. “I followed Alison for years. At the end of the workshop, she (Alison) said you should have a project to keep up with everything.”

Melinda took this suggestion to heart, and decided to put a cookbook together with photographs and essays. In order to photograph all the stages of the island, this meant that she lived on Chappaquiddick for eight months. When she tired of writing she would grab her camera and go to the sea. During the off months, she focused on the essays, book design, and layout. “I lived like a monk for a year,” she jokes.

The photographs tell a simply beautiful story. Not only do they capture a day in the life of a fisherman, but Melinda also captures moments of the island that many may overlook. With her camera she brings to life wisps of delicate sand angels, clusters of berries cradled in a branch, and whistling bent sea grass. On another page, Melinda gives you the sight of birds stepping on the shore and if you pay close attention, you can see they are conversing with one another. It is as if they know they are stepping on protected shore.

Jeff and Melinda have appreciated and followed the writings of Vineyard Gazettecolumnist Brad Woodger for years. Melinda adds, “My husband and I would read it out loud to each other. Brad has a beautiful way with words.” They decided his contribution would provide the perfect complement to Living Off The Sea.

Melinda is especially fond of Brad’s essay, “A Fishing Affair,” written for her book, in which he describes the intimate relationship between man and the fish. Brad writes, “I think if we held everything before we ate, we might be considerably more reverent of our place in life, and the gift of each meal.”

It is with this reverence for the sea that Melinda and Jeff raised their three children. They built their family life here, Melinda says, with simple pleasures: fishing, reading, playing games and eating together. She explains, “Raising kids in a fishing culture gave them a chance to master skills while they thought they were having fun.” 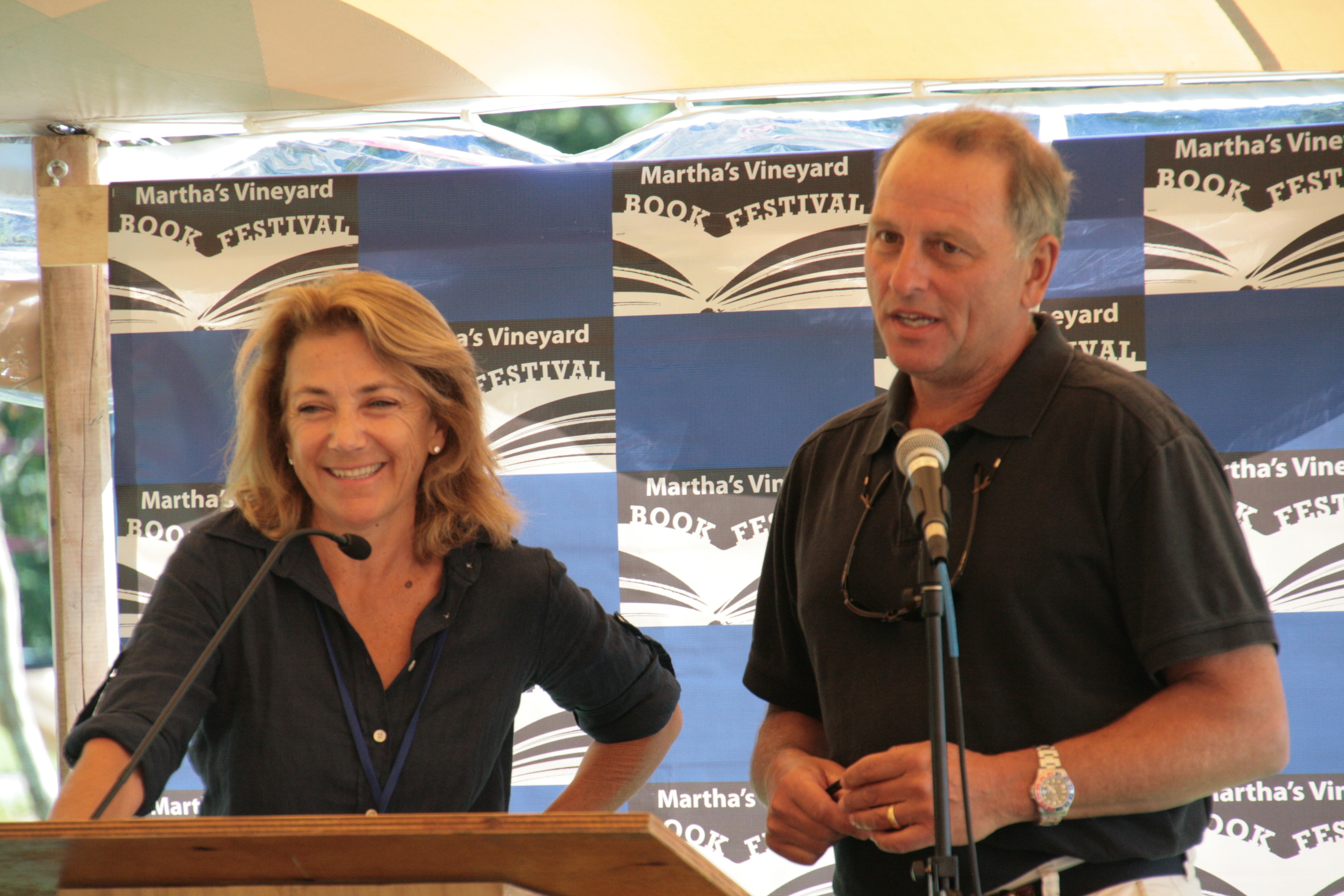 In an equally collaborative effort, Jeff and Melinda put together these seafood recipes. The main course of each meal is Jeff’s daily fresh catch. Typically, this means bluefish, and then local fresh ingredients, from the farmer’s market, are added to bring out the flavor. “I don’t want to camouflage. I want to bring out the best flavor. The key ingredient is freshness… All of our recipes have evolved from making the most of the abundance of fish and shellfish coming directly from the waters surrounding us.”

The recipes are inspired by many local chefs. Melinda is quick to point out that she looks to others for inspiration and she admires chefs like Chris Fisher. Both bring a farm- to- table experience with every meal. She also looks to Vineyard chef and author Suzy Middleton for her presentation and use of fresh foods.

With recipes for blueberry pancakes, skunked pasta, stuffed quahogs, and blueberry vodka tonic, the cookbook can easily move you from breakfast to after dinner dessert. All the recipes are simple, involve minimal prep work and contain a handful of ingredients. Over this summer, Melinda says she has created additional recipes that will be added to her online blog.

Melinda’s blog, website, and book also contain stories and essays about the island. A recent blog entry profiles Chappy local Dana Gaines. He is the talented illustrator for the book, and delivered the sketches for her book in true Chappy form. Melinda says on her blog, “Jeff and I were boating in Edgartown Harbor and we heard our names being called out by someone in a passing sailboat. It was Dana and he was waving a packet. We pulled up alongside him and he handed over the latest illustrations.”

With her blog, Melinda plans to feature other recipes, photographs and stories that all part of the island. I’ve been happily surprised that the stories and essays have drawn as much interest as the recipes.”

Below you will find a recipe for the Fish Marinade — I made this. It is simple and delicious.
“This is my basic marinade for bluefish, bonito, and striped bass, and it can extend to almost any fish you have available. I tend not to use as much basil with striped bass, so that I don’t take away from its subtle flavor.”

What you need:
2-3 tablespoons butter
1 teaspoon Dijon mustard
Juice of 1 lemon
1 garlic clove, minced
Salt and pepper
1-2 tablespoons chopped basil leaves.
Melt butter in saucepan and add all other ingredients.
Spoon this mixture over fish fillets that have been placed skin side down on a platter.
Refridgerate for an hour
Near the end of cooking the fish, either on the grill or on the stove, use the leftover marinade to top off your fish.

You can also read this article on The Huffington Post

Did you LOVE this blog? Don’t miss a single one! Join today and get your complimentary copy of 5 Ways to Practice Gratitude Today!